Just an update on my bursary project .

I completed the workshops this week working with participants on reviewing their photos following the photovoice sessions. They had great photos and they also had a lot to say.

My blog post for now is just sharing the realities of using participatory methods - which can be quite draining. The process kept me on my toes and I had to be continually changing the layout and process according to the emerging themes and also what participants shared or wanted to do.

Language barriers were also another factor due to the different IsiZulu dialects with the participants continually teasing me about my "IsiZulu saseGoli" - which basically means I speak a very diluted version of the real Zulu language which is from Johannesburg. Another aspect was the cultural differences that become more and more apparent - as much as I am a black South African - I noticed that my view and cultural perspectives of life was vastly different to those of the participants and made me realise how we as researchers always design research based on so many assumptions.

It took us a whole day to get people to select their top 10 pictures that they wanted to share stories on. One other person then confessed that he had just been excited to have a camera and so was taking pictures of his visit to the beach and other family celebrations - in short none of his pictures were related to the theme under investigation. We then agreed that he could have the camera for another day - which meant that all his photos where taken on one day instead of the whole month as planned. We also completed drawings started in the 1st set of workshops where people talked about TasP and in groups drew their representation of before and after TasP. 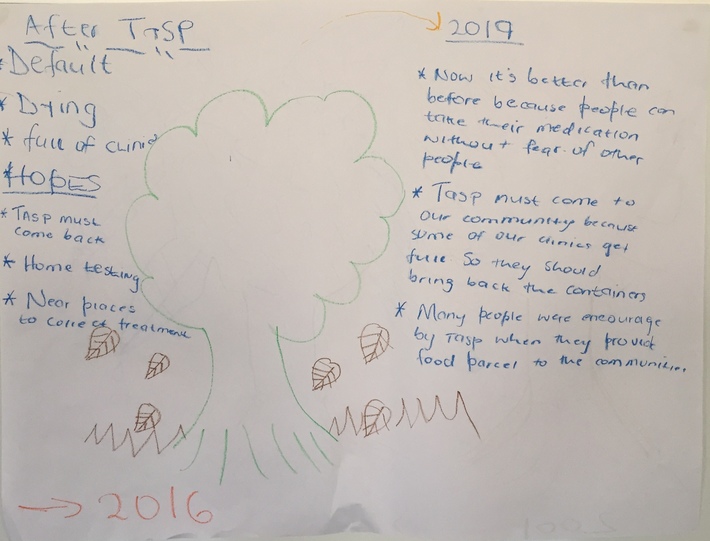 The second day involved the discussion of themes where we gave participants the opportunity to do a mini-showcase of their pictures. Everyone stuck their photos on the wall and we walked around with one person presenting on why they had taken the photo and how it made them feel. This was quite engaging which I do not think would have been possible interviews. The group of participants quickly developed a bond and created quite a friendly environment with some of them complaining about the food given during lunch. So on the 3rd day we had to find a different catering place - which obviously also put a dent on my budget, however I think it was all worth while.

On the 3rd day we then had to do each participant's biosketch as well as type out the narratives for each of the photos which took most part of the day. We also did the digital story sessions and I was grateful for the assistance of Phumla - who is in the Communications department at AHRI as she is much more skilled with the camera than I ever will be.

My take home points are that if you are doing participatory methods - it would be advisable to get a facilitator with expertise in the method. I had Nabeel who came with Thuli from Cape Town to facilitate these workshops. This is however a costly expense which I think few funders are aware of or happy about. I would also advise planning for 2 extra days as something will inadvertently go wrong or cause delays. This also means more money to be put aside for these emergencies. When you budget - also remember the expenses involved in engaging communities and participants as these build up, another cost was that of additional photos being printed so that people could have a bigger/wider choice to choose from.

Although doing participatory action research is worthwhile and is quite important, I also think doing it well can be quite time consuming and exhausting when done well without taking shortcuts. Good luck to anyone considering it in the future. Dear Nothando - thanks for this great update! It's so good to hear how your participatory session went. Very interesting to hear about the good things, and also the challenges you experienced. I'm glad to hear that despite the challenges, you found that it was all worth while. Thanks for including the photos too - they give a good sense of some of the issues you discussed. What are your next steps for the project now?